Anthony "Agony" Garratt is a Caporegime of the Bluesky Irish Mafia in Rock Hill, Bluesky, and an associate of Donovan Eames. Since he became a known member, Garratt has been tried and acquitted on five separate murder trials, every one via asphyxiation. An "exchange operator" for Bluesky's Shipping Union, whom he seized control of by strangling its president, Garratt is the eyes and ears of Rock Hill's clandestine importation trade.

Garratt was born to Irish Romanist parents in 1987, Central Pike. The Garratt family traveled to Langlande when Anthony was a little boy. In 1991, after his mother's death, he moved to Rock Hill with his father and one of his brothers (a second brother, Colleen, remained in Pike). The family ended up in Rock Hill, otherwise known as "Fookinhill," a laboriously Irish area in northern Bluesky that was infamous for its smuggling crime.

It is not clear how Garratt received the nickname "Agony". It may be from the supposed ways of torture he applies to others: from choking, burning, maiming and asphyxiating; though it may just be a dialectal misunderstanding, as a heavy Irish pronunciation of Garratt's first name "Anthony" circumvents vowels, making an "Ahg-hun-ee" note in the Gaeilge tongue, rather than "Ann-thah-nee".

There are two different styles he frequents: Long pinstripe suits, dark ties, and a stylish fedora. Or there are the plain shirts, heavy coats, and the soft wool cap. 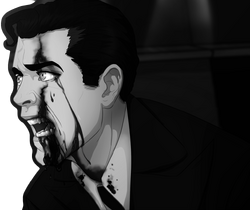 Over a decade, Garratt has faced many injuries in his line of employment. From botched deals, rival assassination attempts, to drunken brawls; Garratt has walked away tainted. The most notable mark staining his flesh is a long, profound scar spread vertically over his face; from chin to brow. He would bear this wound for the rest of his life, the scar bearing a mental toll on him. Serving as a constant reminder of his existence, it prevents him from ever returning to a normal life. The scar, in a way, was a wedding band to his life of crime: one he could never divorce himself from, not now nor ever, till death.

He received this lifelong bond from the woman he wanted to spend his life with: Susan Mortenson. A beautiful model and aspiring actress, she was famous for her seductive persona and known as a universal sex symbol. On the night of his proposal, two surprises happened. When he went to kneel down and raise his diamond, she reached into her hosiery and pulled out a pistol. Seeing this, he lunged for the weapon and averted it late, a bullet skimming over his face. The horrific wound on his face is nothing compared to the deep, hollow agony that drifts where his heart may have once been.

In 2009, his confrère, Donovan Eames, became a made man after a successful display of loyalty and allegiance. Within the next two months, a silent war with the 6th Street Gang began, as the street gang ran over and paralyzed a made man of the Irish Mafia.

Donovan and Garratt are assigned to assassinate Liam Black, one of the 6th Street's enforcers, a suspected caller of the hit. The two conduct surveillance on Black, and a week after are assigned to raid his house and kill him. They adorn black outfits and enter the house, armed with suppressed weapons. Upon finding Black, they realize he has a visitor. The pair, not wasting any time, killed both. They set the house on fire and make a quick exit, destroying the gear they used in the killing the next day.

A few weeks later, Don Driscoll plans to sell fifty pounds of methamphetamine a week to a cartel in Primavera for $1,590,150 per delivery. However, with the police already investigating the family, it wouldn't be wise to deliver the meth. Elliott Eames and River Deller argue against the aforementioned meth deal, but Driscoll doesn't want to hear it. So Eliott, River, Donovan, Garratt, Welles, and other members of the mafia meet in Welles' bar to plan a hit on Driscoll.

They came up with the idea to whack him in the bar, an ideal place. Two days later, Garratt stood lookout outside, greeted Driscoll, and locked the tavern to trap Driscoll inside. Ten members of the Irish Mafia, armed with suppressed weapons, shot the Don; each firing a single bullet as their say in the assassination. After removing the body, they called a meeting for the higher-ups of the syndicate, explained their reasons, and voted in Elliott Eames as the new Don.

Days after this, Donovan is assigned to bring down 6th Street's leadership. Donovan, Garratt, and Welles, along with others, conduct heavy surveillance on their rivals. They soon learn that the aforementioned enemy gang conducts a methamphetamine operation, and also sell heroin and marijuana.

They eventually find 6th Street's meth lab: a "super-lab" under a gang-operated butcher shop. The Irish plan to storm the lab and take it, and use it for their own purposes.

Donovan, Garratt, Welles, and nine others dress up in black a week after initial planning began, and storm the lab.

The 6th Street Gang's super-lab falls into the hands of the Irish.

David E. Hilliard, 55, Shipping Union leader, killed by an unknown weapon via strangulation; found on June 14, 2006, in his third-floor apartment at 77 Muscleborough Street in Rock Hill.

Albert D. Salvo, 85, was thought to have been killed by natural causes; however, lynch marks on his neck later found at autopsy were signs of strangulation; found on June 28, 2008, in the Rock Hill Retirement Home.

Aaron M. Kosminski, 23, barber shop artist, killed by his Imponte Phoenix from over inhalation of exhaust fumes; tampering suspected, but when detectives used illegal tactics to try and catch Garratt, and the court ruled their actions as "nullity of procedure" to testify Garratt's sworn alibi.

Jackson D. Molay, 71, known Consigliere of Bluesky's Kosher Nostra, found with extremely high levels of blood-borne alcohol which caused coma and death. Unusual, as he was under the Nazirite oath; The Torah praises the virtue, courage, and holiness of one who vows to abstain from liquor.

Retrieved from "https://gtafanon.fandom.com/wiki/Anthony_Garratt?oldid=32410"
Community content is available under CC-BY-SA unless otherwise noted.