Chinook is a state in the Pacific Northwest region of the United States of America. Chinook is most well known for its two staples of industry: Trees & Technology. The eastern part of the state is home to many tech powerhouses while the western part is dominated by the logging industry. Chinook was also considered the most "Lumberjackiest" state in a 2014 survey. Its largest city is Roseport. 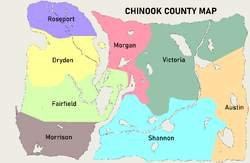 Retrieved from "https://gtafanon.fandom.com/wiki/Chinook?oldid=39785"
Community content is available under CC-BY-SA unless otherwise noted.