Emma White is an Australian-American mobster and leader of the Vespucci Angels Motorcycle Club. She is also referred to as the Queen of Vespucci Beach.

Emma was born in Los Santos after her parents came over from Australia. Her father was a member of the Australian Angels of Death. By this point, he wished to have the best for his wife and unborn child. The Lost MC from Los Santos offered him a chance to make better money and considered that betraying the Angels of Death would mean he and his wife would end up dead. Taking up the offer, he and his wife left for Los Santos where Emma was born. Now with permanent residence secured, Emma was put into school and she found herself specializing in accounting. Her father then used her talents to aid the Lost in several criminal activities such as forgery and even counterfeiting money.

When the Angels of Death in Los Santos got wind of Emma's father having moved here with his wife, they decided to pay him a visit. While Emma was working, the Angels arrived at her home and brutally murdered both her parents. She returned home to find her parents dead and was stricken with grief because of it. Knowing who it was, Emma and the Lost MC payed a visit to the Angels and killed them in a violent war for revenge. Once this happened, Emma was a full fledged member of the Lost for a brief while. It was then that someone began killing off the Lost that Emma left the club in order to begin her own business. 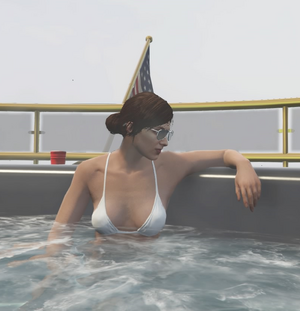 By 30 years old, Emma had begun creating a variety of different businesses, mostly those of a criminal nature, such as drugs and forgery. It was however her background as a biker which made her form her own motorcycle club, which she named the Vespucci Angels, as the headquarters of the club is right on Vespucci Beach.

Her reign isn't only limited to the Vespucci Beach, however, as she also works and relaxes on her yacht, the Emma's Mate.

As successful as she became, Emma found herself unable to share her success with anyone else. As a result, she started searching for a king, to rule by her side in their kingdom of Vespucci Beach. As a result, she would find herself clubbing while under the watchful eyes of her guards. It was then one night, somebody went to poison her drink and a man named Kevin Marcus stopped him before she was harmed in anyway. As a result, Emma repaid her rescuer with dinner aboard her own yacht and eventually cocktails. After having several drinks, Emma and Kevin headed for her bedroom where the two spent the night.

The next morning, Emma and him had breakfast together and realized he was in fact a nice guy. Keeping her true income sources from him, she revealed she was the CEO of a company called White Arms Inc., working as a legal weapons manufacturer. After several more dates, Kevin and Emma decided to marry and held a private wedding ceremony on her yacht. Since then, the couple have been inseparable. It was however one day that he found out she was not a CEO of any corporation, but a gangster. Despite this, he confronted her about it and offered her his own services, which despite her reservations, accepted. 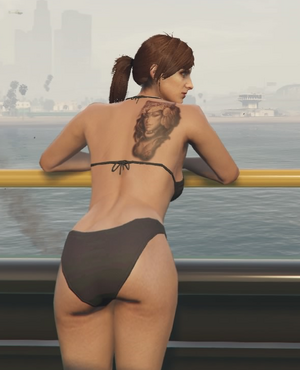 Having been born to a member of a motorcycle club, Emma was taught much of her skills by her late father, who once was a member of the United States Army during the war between the Americans and Australians. She has put this training to good use as a mobster, in order to help her fight and better survive against the gangs of Los Santos.

Emma is a Caucasian female in her late 20s to early 30s. She has blue eyes, which are concealed behind a pair of lizard contact lenses and has brown hair. She is physically fit to many women of her age, with an hourglass figure.

Emma is a workaholic-type of mobster, who cares about the progress of her businesses and how well they're producing a product. Despite the fact she has bodyguards, Emma is a hands-on kind of boss as well, meaning she will enter situations usually proven dangerous to her well being. She does care for her workers and takes care of her own, meaning she won't spare anything to ensure they're content while under her employ. 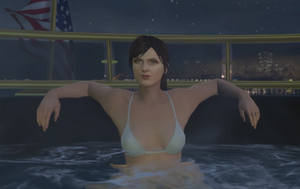 As far as other gangs are concerned, Emma doesn't start fights with gangs, however, will not stand for anyone interfering with her business. Should anyone cross her path, immediately becomes an instant target for her and she doesn't care who it is or how long it takes to end them. Despite this, Emma has been known to have her soldiers hit gang hotspots to set an example or to simply remind the gangs of Los Santos who is truly in charge.

As a boss in Los Santos, Emma is known to have an array of weapons and equipment to better aid her in her operations in the city.

Retrieved from "https://gtafanon.fandom.com/wiki/Emma_White?oldid=32797"
Community content is available under CC-BY-SA unless otherwise noted.