From 4 vs. 4 gang clashes over streets to 16 vs. 16 battles over entire blocks, and up to full-scale gang warfare with lobbies of over 100 players simultaneously striving to take over the city for their set is the heart of Gangland; Play intense and gruesome cooperative gameplay with your friends to seize and keep the city keys.

In GPS or player coined 'Hardcore' mode, players enter into a dynamic ranked mode where they are granted a single life, emphasizing the importance of that life. There is only one singular GRM World in which the majority of players exist, thrive, or simply try and survive. If a player were to die via any means, whether through gang violence, vehicular errors, falling from heights, or other unfortunate ways, they would from there on be removed from the server world. Players arrested in GPS cannot return to the server unless they complete their sentence or receive bail. Controversially, players have the option to pay $100 USD or $100,000 in-game currency for the Miracle Cards, which can be used to revive their character, however, this has caused a massive backlash within the community against Rockstars' ongoing greedy exploits.

Conversely, the other more accessible game mode, player coined 'Passive' mode, are the Gangland Player Modes (GPM), where players have unlimited lives and more leeway with the Grim Reaper. These are the more populated servers and are very popular among casual gamers looking to play with their friends. However, progress is only temporarily stored in terms of territories and skirmishes, and gang turfs are fixed in place and cannot be seized or annexed.

Gangland player-to-player communication is entirely based on proximity or through the use of a phone. External hardware party chat systems are disabled, forcing players to rely on the in-game proprietary speech and expression system. Due to the lack of a built-in Heads Up Display (HUD) or User Interface (UI), players must communicate and express themselves using a Diegetic Interface. Due to the proximity restrictions, players can only hear other players who are directly within earshot.

Trades cover many topics from small things such as clothing, trade items such as drugs, to high profile expenses such as vehicles. Personal effects such as money and clothing are persistent, however, only if stored correctly, securely, and most importantly, secretly. Amenities and equity can be stolen at any time within reason, such as player-owned vehicles, weapons, illicit material caches, and stored clothing at other players' discretion. For example, it is commonplace for a player to be 'licked' or robbed of their fancy clothing, such as Hinterland boots or Bigness jackets on the sidewalk.

If a player or the gang with which they are associated gains too much notoriety and wanted levels, the gang increases their chances of being raided by government agencies such as the Anti-Defiance Squad, which may seize their assets if discovered. This methodology was incorporated into the gameplay so that players would feel more attached to and willing to defend their business ventures, controlled territories, and purchases (as well as to stimulate income through in-game purchases of real-life currencies).

If a player is inactive on the servers, they are granted a strict three-day grace period during which their equity cannot be grieved; however, once the period has expired, opposing players can try to locate and acquire their ill-gotten gains. This period can be controversially extended by purchasing "Grace Cards" in-game.

Players within a gang structure may profit from benefits such as territory defences, which means that if they choose to store their equity within their gang's-owned territories, it is less likely to be stolen because other gang members may choose to protect it. Another issue that may arise within the gang is that members may choose to skim off the top, which must be managed internally within the gang and trust established beforehand. Alternatively, goods may be freely distributed among members, or tithes and donations may be required for continued membership.

Other differences between GRM and GPM 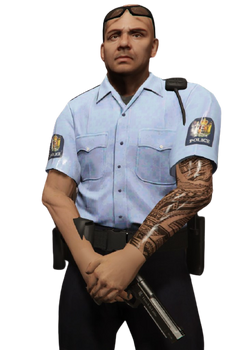 Weapons and firearms are realistically lethal.

A stray bullet can kill an up-and-coming rookie or a hardened veteran of Eden City's streets. Previous game mechanic tropes like regenerative health bars, carrying reserve armour vests, and eating snacks to restore health have been removed in favour of a more realistic and intense experience. Players must rely on their skills and abilities to survive in the absence of an aiming reticule or snap-aim. The more a particular skill or weapon is studied or used in the field, the more proficient and aware the player becomes of it.

Injuries can be unforgivably fatal, from a bullet wound to a knife attack to a hit-and-run from a vehicle. A bullet graze on the dominant arm can cause slight pain, shudders, and hinder accuracy but can be healed over time with care and rest, whereas a bullet through the eye has a high likelihood of an instant closed casket funeral.

Players can choose to reduce the severity and survivability of their injuries by purchasing insurance through the coverage company Mutual Death Insurance, which can be paid for with either accumulated wealth from in-game expenditures or real-world currencies. However, prevention is always better than cure, and one should make every effort to avoid hospital visits and funeral service situations. 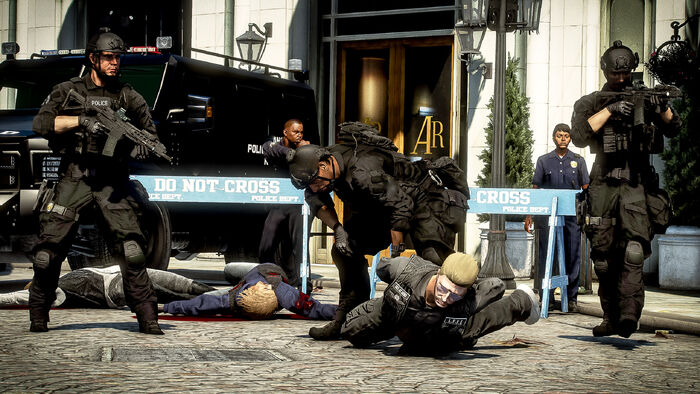 When compared to previous Grand Theft Auto titles such as Grand Theft Auto: Online, the purpose of the Gangland story was to encourage players to create their narrative, history, and community to represent, with a greater emphasis on realistic and down-to-earth scenarios and individuality. Instead of a predetermined plan and history, the player has the freedom to go in any direction they want, with their choices influencing future decisions and options. Everything can go as planned, or it can all come crashing down in an instant.

Gangland's goal was to combine and blend gang cultures from around the world in a realistic and plausible setting. Gangs draw inspiration from trigger-happy gangsters in the United States, knife-wielding mandem in the United Kingdom, machete cartels in Mexico, Yakuza gokudō in Japan, and everything in between. If one so desires, one can enter the police force and be as filthy or clean as one pleases.