The owner of this page is Jim Logan. According to policy, no other user, with the exception of admins, may edit this page without the owner's permission. If they do, they will be blocked. 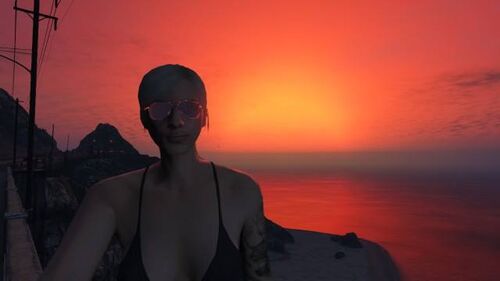 Laura woke up in stages. First, came the headache, then came the toothache, then the bulletwound, finally she was able to actually get out of bed. Her shoulder was bloody, one of her front teeth were missing, and bottles of beer littered the floor of her apartment in Paleto Bay, 4401 Procopio Drive.

The night before she'd been contacted by Trevor Phillips of Trevor Philips Industries to raid some warehouse of the Vagos, the Lost MC came in during the raid, a shootout occurred, the police were on them in a minute, Laura had to abandon the score as NOOSE was called in. She drove back to her house in her Gauntlet and slept off the bullet wound. In retrospect that wasn't the best plan, but at the time she was trying to kill the pain with alcohol. Laura discarded her gray t-shirt, covered in bullet holes to the floor and opened her wardrobe, only three articles of clothing were in there, a white TPI t-shirt given to her by Trevor himself, her black leather jacket and an extra pair of pants. She grimaced and put the shirt on, wincing as she moved her arm

A knock at the door "Oh fuck, is that the cops?" she thought to herself

She took out her Heavy Pistol and crept toward the door, but before she got there, it was broken down and Trevor charged in, lime green Zanchodo shirt, green camo pants, he had shaven his head a week prior, and had been letting his beard grow out. He looked extremely pissed.

"Where the fuck is the score!?" he shouted, grabbing her by her shirt collar

She dropped her gun and raised her hands showing she didn't want to fight "The leather boys and the 5-0 charged in, they took the score before I could get there."

Trevor let out a rage-filled scream and threw her to the floor "You have any idea how much fucking money I just lost!?"

"Can't you just get it back in like, a week? You know with your little drug smuggling business?"

"No! Those Vagos fuckers killed my runners! The only way I am making that money back is if I fly my entire shipment down to Mexico myself!"

Laura propped herself up, pushing on her left knee "What about that Wei Cheng guy Ron was talking about, why don't you get in touch with him?"

Trevor punched a hole in her wall "Why the fuck would I ever work with them!?"

Laura sighed "Because you don't have many other options you asshole. Sooner or later your little hush money you give the boys in blue is gonna run dry, and they will be on your ass. Laura picked up her gun and placed it in her shoulder holster, throwing her jacket over it and grabbed her keys.

"I'm heading down to Los Santos, my buddy Calder got in touch with some rich guy down there, he says he's got the money he owes me."

"How much does this Calder owe you?"

She shrugged "Ten grand? He bought some car."

"When are you going to be back?"

Annoyed, she pondered the question and lied, "I don't know dude, Friday?"

"Chasity is gonna let me crash at her place while he gets my money. Don't try to fuck Paleto up too."

Laura got into her garage, it was a four car, but the only thing that ever inhabited it was her black Gauntlet. She hopped in, tossing her overnight bag and started driving towards Los Santos. She noted the sun was starting to set as she got over the bridge. She stopped the car and took a selfie of her in front of the sunset. She sent it to Calder with the message "I'll b there by 7. C u then."

Laura went to get back in her car when four Lost MC members pulled up, shotguns and AK's at the ready. The leader was a bald man with a blond soul patch.

She leaned on her car, digging for her sawed-off shotgun with her left hand "What?"

She pursed her lips "I'm heading to meet him now."

"Where?" He repeated, agitated

She shrugged "Dunno, said to meet him out in South LS by some Arab's car dealership. Why?"

He noticed the logo on her t-shirt "You work for him?"

Laura nodded "Uh yeah, he calls me in sometimes to run drugs in and out of Paleto Bay for him."

"Once every couple weeks, maybe three times a month. Depending on how the business is doing."

"What's with the shirt?"

She chuckled "He gave this to me when he couldn't pay me, said this was worth me getting shot at by a shit ton of cops."

She noted the four Lost members were reaching for their weapons... Laura, with her right hand whipped out her Heavy Pistol, fired off two rounds hitting the two on the right, and fired her shotgun at the one on the left, the leader rode off past her as a bullet grazed her the same wounded shoulder. As the man drove away she fired four more rounds at him, hitting the back tire, popping it.

She sighed, laid her head against the car "Fuck my life man, fuck it."