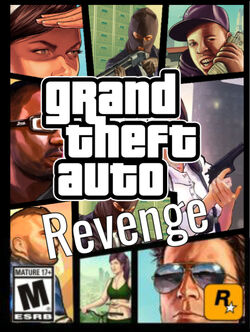 ❝ One of the most influential and successful games ever made.❞
―The New York Times

Grand Theft Auto: Revenge, also known as GTA Revenge, is the 27th installment of the Grand Theft Auto series and was released on September 18, 2019, for Consoles and July 27, 2021, for PC and Mac.

Grand Theft Auto: Revenge was a huge step forward in the way that Rockstar develops games, All of the current Rockstar Studios had to join together to help make this huge game.

The game was met with an outstanding universal critical acclaim, becoming one of the highest rated video games in history.

Here are the characters the player can play as.

"You've been sent out of retirement. Now you're taking revenge, unless the city gets you first. Mob bosses need a favor, crooked cops need help and street gangs want you dead. You'll have to rob, steal and kill just to stay out of serious trouble. Anything can happen out here"

While crossing the Bridge to Carcer City, a group of Russians ambush James by blowing up the exits to Carcer Bridge leaving them trapped on it.

James manage to free himself and calls Marcus to come help.

After Marcus helps James get off the Carcer Bridge, James decides that Carcer City is too unsafe to stay in so they fly out to Vice City.

Marcus introduces James to David Payne in Vice City and James works for him to prove himself useful. David orders him to drive Johnny Leone Boomshine, to Johnny's garage.

Johnny introduces Marcus and James to Jason Hamilton, who they begin working for to exact revenge on the Forelli's after a failed assault attempt in one of Jason's local SuperSave shops.

After proving himself, Jason takes James, Olivia and Marcus to Cottonmouth City where James gets caught up in the Casino business where he meets Tom Jericho who brings James and Marcus to Sundale City. After a few missions Tom betrays James who gets shot and left for dead in the outskirts of Sundale City,

Luckily for James, a man named David Hudson finds him and takes him to a hospital.

While James is in a coma players can no longer play as him, More missions for Marcus are unlocked...

2018 - James then has to work his way back up doing missions for David Hudson who helps him kidnap and torture Gonzalez Ramirez for info.

They tried to make Gonzalez tell them who else is on Tom's Team, but he wouldn't budge and was eventually killed after telling them about Aaron Higgins who has been in Bullworth since November 25th, 2016 but since James and David had no money on them at the moment they had to do a couple Heists.

So then they had to get the gear from Bryan Bayley who Marcus said is a great guy to do Heists with.

They did a heist at the Sundale City Bank before Bryan double crossed them and took all the money.

So David and James robbed some people for plane tickets so they could fly to Carcer City, They then Robbed the Carcer City bank, They then had enough money to get a Motel Room and some plane tickets to Bullworth, When they were there they found out where Aaron lived, so they paid a visit to his house and after severely beating up Aaron, He told them that Tom was hiding out in Liberty City. they then drove to the airport and flew to Los Santos,

When they got there they spotted Tom walking out of a Ponsonbys Clothing Store, James fueled with rage grabbed his gun and started shooting at Tom who drived away, they then had a little chase which resulted in Tom's Vehicle crashing into the Mile High Club tower, James and David chased Tom who sent Bryan and Joe James manages to shoot Bryan in the head and David snaps Joe's Neck before chasing Tom up to the top and then Tom reveals that he setup the entire events of the game.

James and David get into a fistfight with Tom before James and David manage to kick Tom off the Mile High Club Tower, After a couple of seconds a splat is heard, They look down to see Tom's Body, Blood and Body Parts splatter the pavement below...

They then escape to the airport, David gets a plane ticket to Sundale City and James gets plane tickets back to Carcer City.

David Hudson wakes up in an alley blood-soaked with no memory other than his name....

Tom disappears without a trace.

A funeral is held for Cole Miller

Tom is seen in a basement, an unknown character steps into frame "please... don't..." a gunshot rings out.

Tom falls to the floor.

A separate game, it follows Jack Morgan as a worker at Shadow Identity before being left for dead on the job.

If you Pre-Ordered the game you got Grand Theft Auto V Premium Online Edition and the Special Edition.

Grand Theft Auto: Revenge received positive reception but people still agree it is the best game that Rockstar has ever made with it having sold and it is addictive to play. The game currently holds 97/100 on Metacritic, based on twelve reviews. and 96/100 on GameRankings based on eight reviews as well. Most critics so far have praised the game for its new settings and upgraded content

GRYOnline.pl awarded Revenge with a positive 7.5/10, declaring that "the storyline is simply fantastic and the online mode is a giant improvement from GTA V.",

It has received multiple Golden Joysticks.

It also has shipped over 54 million copies and is one of the best-selling video games of all time. A widely anticipated game, Grand Theft Auto: Revenge broke industry sales records and became the fastest-selling entertainment product in history, earning US $150 Billion in its first day and US $652 billion in its first three days. It received widespread critical acclaim, with praise directed at its multiple protagonist design, open world, presentation, and gameplay. The game caused controversies related to a mission featuring torture during a hostage interrogation. including Game of the Year awards from several gaming publications.

The game contains 5 rampages in each city (10 in total), all against gangs and 3 types of collectibles: