View source
watch 01:36
We're Getting Mutants in the MCU - The Loop
Do you like this video?
Play Sound

❝ Everyone remembers the days when the Mammoth Hydra made everybody tremble with fear, when it appeared above the horizon. The new generation of this legendary fighter jet meets all the standards of modern aviation and has incredible power and maneuverability. No doubt the Hydra MkII is the choice of a real psychopath.❞
―Warstock Cache & Carry

The Hydra Mk II appears as an upgraded version of the Hydra. It has several liveries which can be purchased in the hangar.

The Hydra Mk II takes inspiration from the F-22 Raptor and the Harrier Jet. 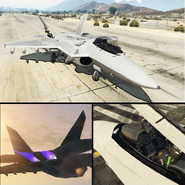 The Hydra Mk II has countermeasures and VTOL system like its original version. The vehicle is armed with homing missiles and explosive cannon.