"I met you on the street after barely surviving a gunfight, I helped build the biggest crime organization in London. The reward? Betrayal, betrayal from some jealous fucker who thought he could run his mouth in crime. No, you ran out of luck and cards to play. It's over."
―Joe, after finding Tim.

Joe Preest is the Main Protagonist in Vengeance in Los Santos and a supporting character in The After Dark Scene. Joe's story is his search for a group of men who set him up a few years ago, he plans to find all of them and kill them.

Joe grew up in the United Kingdom and spend most of his life there. As he eventually got older, he turned to a life of crime. Joe eventually met up with a Drug Dealer and that if Joe were to get the supplies needed to sell the drugs, he would get a share in the profit.

Events of the Sheep Mob

"So what is this, a good old-fashioned Drug Deal?" - Joe

After being incarcerated in the Alderney State Correctional, Joe begins to plan an escape. He can get some of the prisoners or his Cellmate to help with the escape. After barely escaping from Alderney he becomes a stowaway on a Plane to San Andreas, where he hopes to get back on his feet and find the Sheep Mob.

Landing in Los Santos, he finds a home and work in Strawberry. He meets Big M and begins work for him. Starting by taking a package from a gang. One of the members of the gang is a former Sheep Mob gangster, who Joe recognizes and can determinant the fate of the gangster. After this Joe does multiple Jobs for Big M.

After saving himself and Big M from an Ambush. They encountered a gang called "The Valenca Mob" who were one of the most powerful gangs in Los Santos. Big M decides to go to war with them. Causing Joe to help take down most of the Valenca Mob. Eventually, Joe decides the best action is for him to go undercover into the Valenca Mob. To which Joe does multiple Jobs such as Burning Down a Warehouse. After this Joe went to go talk to the Don of the Valenca's. Mark Valenca. Who betrayed Joe after one of his workers was actually a former Sheep Mob gangster. More specifically the Sheep Mob's leader. Hill. Joe escapes capture and warns Big M of the incoming Valenca Attack. They then flee to Blaine County, where they hope they can hide out from the Valenca's.

Joe, Big M and E-Wash eventually take over most of Blaine County. By taking over a Meth Lab, Burying Bodies and purchasing a front for Drug Distribution. Then Joe returns to Los Santos, believing that he has done enough help for Big M.

Destruction of the Valenca Mob and the Truth

Helping Big M with one final job, Joe helps kill the Don of the Valenca's by setting bombs on the base of his Mansion. And luring him by giving himself up, the Don tells Joe that Joe's Partner was in on the Job, as well as Joe's boss Tim. Joe gets angry and a gun-fight begins, the Don tries to escape but Joe shoots him in the leg. Then detonating the bomb crushing the Don from his falling house Joe kills another Member of the Sheep Mob who was working for the Don. Joe and M part ways and M wishes Joe luck on his Journey to find the last remnants of the Sheep Mob.

Final Search for the Sheep Mob

Joe begins his search in London. Looking for his former partner. Joe tracks him down to his old apartment. Confronting Him about the day he got arrested. The Partner tells Joe he was forced to do it. As he would have been killed if he didn't. He tells Joe he knows where the rest of the Sheep Mob are. He then goes with Joe to find the last members. Killing the second in command and finding the last one. As Joe is about to finish the Job the partner pulls a gun on Joe. Telling him "Money Talks, But you won't." Joe then has a Choice to kill the partner. Killing him will result in Joe changing his personality, not being forgiving. But if Joe spares him he will forgive him but breaks his legs. Joe then kills Hill the leader of the Sheep Mob. But knowing that his Vengeance is not over he goes back to Los Santos to find his old boss, Tim.

Joe goes to Tim's location. Finding him and attempting to kill him. Tim eventually gets into an Attack Helicopter. Joe eventually Shoots it down. With Tim falling out and slowly dying after hitting the ground. Joe then leaves him, knowing he will die in pain. Joe then stays in Los Santos, knowing that his work has just begun.

After Vengeance in Los Santos

After Joe gets Vengeance, he then meets with E-Wash and they go back to locations they had been to before. Before saying a final goodbye E-Wash tells Joe that Big M will one day need Joe's assistance.

Weeks after Joe's Vengeance, his sister Jade, had come to visit him. Joe had already set up a business which was targeted by a group of low-life thugs. Jade eventually helped Joe scare them away and secure his business. Jade then leaves LS and leaves Joe to tend to his Business.

"I met you on the street after barely surviving a gunfight, I helped build the biggest crime organization in London. The reward? Betrayal, betrayal from some jealous fucker who thought he could run his mouth in crime. No, you ran out of luck and cards to play. It's over."

Joe first met Tim after a gang shootout, saving Joe's life. Joe then decided to repay Tim by building his crime business. They eventually built a strong and powerful organization, with Joe being one of the Lieutenants. Eventually, Tim thought Joe would overcome Tim and take control of the organization. Betraying Joe with the help of Corrupt Police Officials and the Sheep Mob. Joe eventually tracked down Tim a few years later and kills Tim.

"Thanks for everything M, you've been a good friend to me, there isn't many people I say that to. Hell your the first."

Although starting on the wrong foot, Joe met M at his apartment complex, listening in on a conversation. Joe eventually asked for work and began to work for M. Eventually they got closer with Joe being a close associate of M. M eventually began a War with the Valenca's. Joe then began to work undercover in the Valenca's, sparking a brief argument between the two because of the War. Joe eventually took down the Valenca's, which re-ignited the friendship of the two. M wished Joe luck on his search for the Sheep Mob. M kept in touch with Joe after the story, consistently asking if Joe needs anything. To which Joe replies that he has done enough. 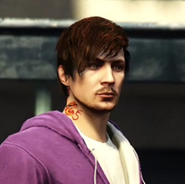 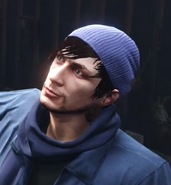 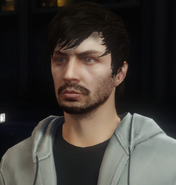 Add a photo to this gallery
Retrieved from "https://gtafanon.fandom.com/wiki/Joe_Preest?oldid=30845"
Community content is available under CC-BY-SA unless otherwise noted.