Spoiler Warning: Plot and/or ending details are in the text which follows.

"Light & Shadow offers a different experience than other Grand Theft Auto game, but that's what makes it special and stand out in the series."
―Geoff Keighley 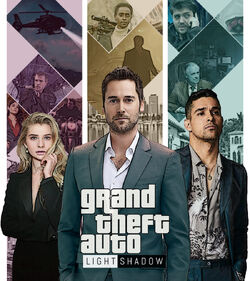 "All this elegances are fake"
―Tagline

A Grand Theft Auto Title: Light & Shadow, commonly known simply as Light & Shadow or abbreviated as L&S is a video game developed by collaborative effort between Rockstar North and Remedy Entertainment, with Sam Lake and Dan Houser co-write the story. The game serve as a special spin-off for main Grand Theft Auto installment. The single-player story set in Vice City – based on Miami; and follows three con artists with different background as they stage a long-con to end a mysterious underworld plot.

The game's development began soon The development of Light & Shadow started shortly after the releases of Grand Theft Auto V. It was released for PlayStation 4 and Xbox One on December 18, 2020. PlayStation 5, Xbox Series X, and Microsoft Windows versions are scheduled to release in the second half of 2021.

The game met widespread critical acclaim and perform well in sales despite slightly lower than Red Dead Redemption II in the opening week. It also generated controversies for its satirical depiction of modern cultures.

Author's Note: The works of Light & Shadow are purely fictional. All arts, concepts, and characters related to this game were made by Wiseman the Writer. No other user, with the exception of admins, may edit or use related contents without the owner's permission.

Light & Shadow marks the return of Vice City, based on Miami, as the main setting location. The map divided into three sections: mainland Vice City, resort city Vice Beach (Miami Beach), and wetlands of El Calvero (inspired by Everglades). The story runs throughout summer and winter of 2017. After the story completed, the time moved to summer 2018.

Vice City nicknamed as “The Bridge” by criminals, as it connects North and South American underworld. The city serves as the main market and distribution center for drugs smugglers from Latin America. The city is populated by influential gangs from diverse backgrounds.

Light & Shadow is the second game in Grand Theft Auto series to feature three multiple playable protagonists: Thomas Kingston, a freelance con-artist and thief; Maria Vinogradova, a contract killer; and Andrea Acconcia, a corrupt private detective working for Italian Tacconi Crime Family. The player will determine their connections near the end of the story.

Following the backlash over the death of Johnny Klebitz in Grand Theft Auto V, Rockstar decided to not reuse previous characters for the game to maintain the established canon.

"Light & Shadow portray the depth of the most covered deception act in the gritty and colorful Vice City. Behind the seemingly calm crime world of the city, some of the powerful kingpins were displeased with the current situation and planned to do something "big". Among people who discover their plan are three con-artists from different profession who never meet before. Realizing that it is almost impossible to stop the possible chaos, the three must works together to plan one long-con to end it all."
―Synopsis

In 2017, Thomas, Maria, and Andrea are working separately for people around Vice City. Brazilian kingpin employs Thomas to scam his rivals, including businessman Hector Vera. Meanwhile, Maria is hired by Russian gangster Nikolai Kirikov, until she secretly joins their adversary, a hit squad lead by a contract-killing fixer. In other part of the city, Andrea is helping the Tacconi Family facing their law difficulties and Fabio, his troublesome twin brother who works as a freelance hitman.

The three discovers that several powerful crime figures are planning to seize the city's underworld. This include Thomas' boss organization, Kirikov's gang which Maria had turned against, and the Tacconi Family's newest ally, a crime corporation known as Concatenatio. After up in various situations, Andrea unites Thomas and Maria to work together to stop their common enemies.

Thomas then stages a scheme of long-con with Maria and Andrea. Their deceptions run smoothly despite the few conflicts in their early teamwork. They also encounters Rodrigo Fernandez, an ambitious criminal with the interest to conquer the city through defeating the same enemy as the trio. He attempts to overrun their cons by recruitting their colleagues, sabotages their plan, and discloses their plan to their boss. As the result, Hector advice Thomas to turn his focus on something else; same with Maria's friend, hitman Wendell Alridge, and Fabio.

In the meantime, the three go for a hopeless search on Rodrigo. They slowly turn desperate and think that they should stop their cons. The player then given a choice to "Abandon" or "Continue" the long-con.

Should the player decide to "Abandon", the trio part away back to their personal life. Thomas helps Hector to avenge the Brazilian kingpin. Maria discovers that Nikolai was involved in her father's death, and kills him. Andrea turns against the Tacconi Family after find the boss motivation in drug business. Rodrigo will forced to leave the city as he failed to build his empire.

Should the player decide to "Continue", Rodrigo will outrun the trio in destroying their enemies, allowing him to build a crime empire. Thomas later betray Maria and Andrea by selling them out to Rodrigo. However, this was a part of Thomas' trick to trap Rodrigo. The three rejoice their bittersweet victory, that although they finally able to finish Rodrigo, their old partners are no longer together.

Light & Shadow is an action-adventure game played from a third-person perspective. The player completes missions—linear scenarios with set objectives—to progress through the story. Missions designed to provide more player's freedom with each protagonist has their own set of objectives and approaches. After completing the main story, player can replay the missions to complete challenges, which grant gold-medal rating and in-game rewards.

The game re-introduces many gameplay mechanics from previous Rockstar works, notably from Red Dead Redemption II. Stealth mechanic reworked from seemingly-abandoned Agent game, with option to crouch and crawl in certain situation. Weaponry and health mechanics are now based on Max Payne 3, with a limitation of weapons in player's inventory and painkiller, which replaces the automatic health regeneration.

Character customization appears to be less expanse than in Grand Theft Auto V. Player can purchase outfits from clothing store, customize their hairstyle at the barber shop, and wear various accessories solely for cosmetic. Player's clothing affect the character's health, stealth, and defense. For example, enemies will likely fires at player's revealed body part. The protagonist's outfit and appearance will stay on, even if the player switches between the three. Player however, cannot remove any part of their clothing.

Each character has their own expertise. Thomas drives better and has more stamina, but bad in shooting and diving. Maria uses firearms better and skillful in stealth situation, but is the weakest in strength and stamina. Andrea is skilled in hand-to-hand combat and can dive longer, but is the worst in drive and stealth. Even if the player minimized or maximized each character's skills, their advantage and weakness will never changed. Another statistic is appeal, which influenced by the characters' appearance.

Outside of missions, players may freely roam the open world Vice City and its surrounding. While free roaming the game world, players may engage in context-specific activities ranges from darts to scuba diving underwater. Each character has a smartphone for contacting friends, accessing an in-game Internet and enter cheat codes.

The development of Light & Shadow started shortly after the releases of Grand Theft Auto V and lasted for seven years. It was co-developed by Remedy Entertainment and Rockstar Studios—primarily by staffs who previously develops Max Payne 3—with fewer team members than in Grand Theft Auto V due to Rockstar main intention on Red Dead Redemption II.

Sam Lake and Dan Houser write the story, which described as an "improvement" on multiple protagonists storytelling from previous game. Michael Hunter also returned to compose the original soundtrack. Despite the game's smaller scale than Red Dead Redemption II, it features a longer narrative and more advanced game engine and visual.

Light & Shadow is the only game that uses a combination of Rockstar Advanced Game Engine and Remedy's Nortlight Engine. The new engine features a more advanced visual graphics and realistic movements. Northlight has previously featured in Remedy games Quantum Break and Control.

Light & Shadow received "universal acclaim" from critics, according to review aggregator Metacritic (with a score of 92/100). Reviewers liked the innovation, narrative, and characters. Most critics however, criticized the satirical portrayal of real-life situations, particularly the one related to modern feminism, social justice, and LGBTQ issues.

Retrieved from "https://gtafanon.fandom.com/wiki/Light_%26_Shadow?oldid=41892"
Community content is available under CC-BY-SA unless otherwise noted.