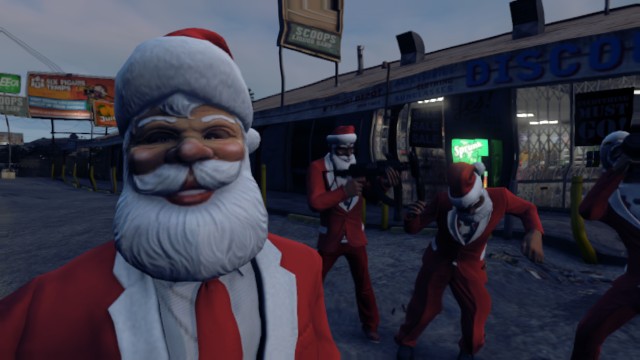 The Los Santos Santas is a group of bounty hunters who work for the highest bidder. They mainly operate in Los Santos and Blaine County.

The Los Santos Santas is a faction of bounty hunters that works for anyone who can afford to pay their high prices.

The members of the faction are easily recognized by the Santa Claus costumes they wear all year long. Their founder and leader is Jackson.

The Santas uses many kinds of vehicles which, almost without exception, sport red colors.

Los Santos Santas operates as independent hitmen who work for those who pay enough for their services. Their known employers include, the Los Santos Triads, and the NightHawk.

As you can infer from the faction's name, the Los Santos Santas primarily influence in Los Santos, but are known to also accept jobs that require them to travel to another city.

King of The Hill

Retrieved from "https://gtafanon.fandom.com/wiki/Los_Santos_Santas?oldid=31765"
Community content is available under CC-BY-SA unless otherwise noted.