The Coin Killer is a killer on the loose in Los Santos.

The Coin Killer started to arise somewhere in mid-January 2016. 911 calls were rolling in about a masked serial killer. As of February 2016, the Coin Killer is still on the loose and has not been caught yet. Rumor has it that he has millions of dollars, is maxed out with cars and weapons, and owns mansions, penthouses and garages. In March 2016, The Coin Killer went inactive and ceased killings. The entire city was put under lockdown on March 9, 2016, and searched for The Coin Killer. However, he was not found.

The Coin Killer resumed his killings in August 2018, after a 17 month absence. The first victim of 2018 was found in Mirror Park on August 5. The FLSQ were redispatched after the killings were reported, but The Coin Killer went inactive shortly after, and has been in hiding since.

The Coin Killer wears a black and white mask, almost like a wrestling mask. He also wears a black and white jacket and black pants. He also wears a bulletproof vest, protection (you know...) and his mask is bulletproof. The Coin Killer also has three vehicles that he keeps in an unknown location. He will always strike with these vehicles, and all vehicles are modded and customized to the max to fit his needs. His first vehicle is a Grotti Turismo R, his second is an Imponte Phoenix, and his third is an Innovation chopper for quick and easy kills and escapes.

The Coin Killer rolls through Los Santos in a car he stole. He picks a random pedestrian as his victim and sneaks up to them, and knocks them out with his modified Knuckle Dusters. When the victim is unconscious the Coin Killer flips a quarter to decide the victim's fate, like Two-Face from Batman.

If the coin lands on "heads" he leaves the victim to be. If the coin lands on "tails" he shoots the unconscious victim in the head with his modified Marksman pistol or Musket, and makes sure blood spills out onto the floor. When he's done he leaves a coin on the floor next to the victim, flipped to whatever side they got, and speeds far away from the area to find his next victim.

The Coin Killer has never been caught in a police battle. He also has always escaped the cops and knows the city of Los Santos inside out. He knows all of the shortcuts, hideouts, and other junx. The Coin Killer also secretly has an underground business where he pays all Ammu-Nations in Los Santos to not rat him out to the cops.

The Coin Killer is known to strike anywhere in the city of Los Santos, where he has killed 291 out of 560 victims (as of August 8, 2018). However, he has attacked in Sandy Shores, where he killed 11 victims and spared 7. The first Sandy Shores attack occurred on February 7, 2016, and the second occurred on August 8, 2018. These are the only known times The Coin Killer attacked in Sandy Shores. Victims were also found in Paleto Bay in 2017. However, he most frequently attacks in east, west and southern Los Santos.

Image of The Coin Killer.

Newspaper article of The Coin Killer. 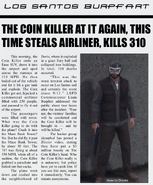 Newspaper article after the 2/2/16 Airliner Hijack.
Community content is available under CC-BY-SA unless otherwise noted.
Advertisement