After the events of Grand Theft Auto: Chinatown Wars, Wade retires and moves to Los Santos . There he meets Dave Norton and returns to work in the police. For a long time, Wade follows the GTA Online Protagonist 's criminal activities and later, together with Dave, invites him to an interview in the SLP squad.

If the Protagonist joins the SLP and orders an LSPD Office , Wade gives him a tour and begins to cooperate with him.

Heston can call the player while he is in the SLP Squad and give him helpful advices. Also Wade can send notifications about any criminal accidents, which indirectly or directly stems with other player's freemode activities.

By calling Wade in freemode and being in the SLP Squad, the Protagonist can choose one of the options:

Heston often makes up false claims about his life, claiming that they are more interesting than what really happened (i.e. his wife was killed/divorced but really cheated on him with his best friend). He often goes on about how they should make a movie about his life. 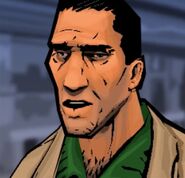 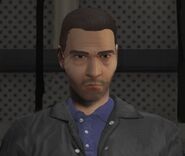 Artwork of Wade in the police garage with his Dukes.
Add a photo to this gallery

Retrieved from "https://gtafanon.fandom.com/wiki/Wade_Heston?oldid=37103"
Community content is available under CC-BY-SA unless otherwise noted.